The first thing I want to say, because it is the most important thing to say this morning, and because it is true is this – the announcement of the Professional Standard Bureau is a significant event, but only one point in the process of this case. The litigation that has been initiated by Mr. Owensby will be another important component.  That litigation extends the process and limits what can be said by me, Mayor Mims and my fellow city commissioners.

I will highlight that we have posted the PSB findings on the city’s website and every citizen has the opportunity to read that report. Part of the process forward will be citizens and content experts reviewing that report and providing their input into our ongoing police reform work. I believe our posting of this finding is a significant act of transparency.  From my experience, this level of transparency is relatively rare in the area of police and community relationships.

Mayor Mims in his statement yesterday did a good job of highlighting the investment we have made in police reform, its ongoing nature, and some of the important changes that have been made or are in progress.  I want to highlight 4 items: 1) The independent auditor will be hired in the near future and I believe it will be in their scope to review this case and that report will add to this process; 2) We have added additional citizen input and oversight into our policing through the creation or expansion of the permanent police committees; 3) A new use of force policy is being developed and will be adopted; 4)  And note, beyond the recommendations – our administration and police leadership have created an ADA compliance officer.

My last point – it is tempting to make easy platitudes or premature apologies. However, those will not serve us well, especially when the relationship between police and the community is strained,  nor be the strong leadership we need to sustain this critical work. I have 1453 days in my current term.  I am not going anywhere. Two to three weeks ago – I observed as we put the permanent police reform committees in place – there is an essential conversation that was started with the Community Police Council – and remains to be had.  The content of that conversation is two fold – What are our expectations – what are the community expectations of the police; and what are the police’s expectations of the community? I am committed to sustaining this conversation.

One of Sir Robert Peel’s principles is this:

"To maintain at all times a relationship with the public that gives reality to the historic tradition that the police are the public and that the public are the police, the police being only members of the public who are paid to give full-time attention to duties which are incumbent on every citizen in the interests of community welfare and existence."

I am committed to cultivating the best police community relationships in the nation. It is important to recognize there is an imbalance of power in that relationship - police have more structural power. I will work hard to make sure the community's voices and participation is fair and substantial. We are in this together.  I look forward to working with each of you to do this work.

Before visiting Dayton, Ohio, you need to know something about us. We value people who clearly and consistently say what they mean - and more importantly, do what they say.

As a city commissioner, I had the privilege of being on the stage as we prayed and honored those who were killed on Sunday morning. You may have heard that the crowd became impatient listening to long statements from elected officials. The crowd's message was, and is, clear: Do Something!

You can do something today. You can demand that Congress put legislation on your desk mandating universal background checks, limiting magazine sizes, and expanding "red-flag laws." You can announce this demand here in Dayton.

And even while pushing Congress to do its part, you can begin to use the power of the Executive Branch to promote technologies and practices within the gun industry that will save lives. You can join mayors and police chiefs across America (including our mayor in Dayton) who are promoting state-of-the-art locks and other products that will prevent gun theft, suicides and the use of guns by unauthorized shooters. Some of those products are available now, while others will need significant federal R&D funding.

The first step is to hold a federal Gun Safety Tech Expo in Washington DC -- a large-scale version of the event organized earlier this year by public officials and law enforcement leaders in Wisconsin. You can announce the date here in Dayton.

We do not want to hear empty words. We want action! If you are not prepared to do something real, do not waste our time. Do not come to Dayton, Ohio.

The resignation of Commissioner Joey William necessitates a special election. This election will be on May 8th! Darryl Fairchild is the only candidate that is known by voters, has a clear vision, a common sense plan, and is prepared to serve on day 1!

He asks for your support and vote on May 8th!

A life-long Dayton resident and a leader who has advocated for the people of Dayton for decades, Darryl Fairchild knows that as a city we can do better. But improvements and the needed realignment of priorities require the right kind of leader. Darryl Fairchild is such a leader.

Darryl Fairchild knows Dayton intimately--its streets, its buildings, its sectors and, especially, its people. And he knows that our neighborhoods have been ignored for far too long.  As a City Commissioner, he will focus on improving our neighborhoods, ensuring that they get the attention they both need and deserve.  He will make sure that economic development downtown does not overshadow the need for improvements in our neighborhoods and that public money expended benefits all Daytonians, not just those of a higher income bracket. He will make sure that the elimination of blighted, abandoned properties becomes a higher priority, that more resources are devoted to programs for our city's youth, and that the alternative economy models growing in popularity in other U.S. cities are fully explored and considered in Dayton.

A respected and experienced community leader, Fairchild will work hard to create jobs and make our neighborhoods places where people are proud to live and work and raise a family.

He asks for your support and your vote on May 8th. 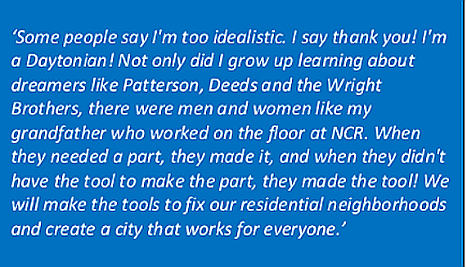 You are invited to explore this website to find out more about Darryl Fairchild, the issues he will prioritize, and ways you can help him win a seat on City Commission.