Like most Daytonians, Darryl Fairchild has seen that the old ways of achieving the American Dream have eluded many of this city’s residents. This was especially pronounced after the Great Recession of 2008, but it began long before that as many Midwestern cities saw the decline and exit of their manufacturing bases.  It was no longer the case that you could work hard, get a good job with a big corporation and expect to keep it until retirement. 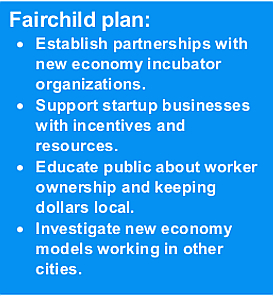 That movement is the New Economy, also called the “Alternative Economy,” although many of the ways in which it is manifested rely on successful models hundreds of years old.  The Alternative Economy creates businesses and programs in which the worker, the community and society at large are all benefitted.  It exists alongside of the traditional economy.

Models which are part of New Economy include:

This list is growing as more and more Americans seek just and sustainable ways to make a living and provide for their families while improving their communities.  They have been spurred on recently by the failure of the traditional corporate economy to provide them with security and to honor the values of community, democracy and opportunity.  In most of the Alternative Economics models, workers and participants are empowered to make the business decisions, and have the responsibility for and control over their own economic lives.

Some very old assumptions have led many leaders to rely merely on the traditional economy, but Darryl Fairchild has a broader vision than most. This well-informed candidate has seen how Alternative Economics models have helped cities such as Cleveland (Evergreen Cooperatives).  Our neighborhood to the south, Cincinnati, has seen a remarkable upswing lately in the number of new economics models, including union co-op initiatives encouraged by the USW; social businesses created for the purpose of employing or training people, not for maximizing profit; cooperative housing and equity-gaining programs for renters; and grocery stores owned by workers and neighborhood residents slated to open in food deserts and poor food access areas.   There are many more U.S. cities reaping the benefits of the Alternative Economy.

Fairchild has walked his talk over the years, becoming a member of the Fifth Street Brew Pub cooperative, supporting the Dayton Time Network and helping promote the idea of a co-op grocery store in West Dayton.

Alternative Economic models need to be fostered throughout the city, supported by strong collaboration across all sectors, including public and private, and the city of Dayton needs to be a committed partner, Fairchild believes.