Darryl Fairchild, the candidate with the focus on Dayton neighborhoods 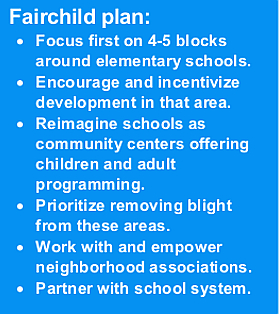 Making Dayton neighborhoods a priority is a logical and necessary way to bring positive change to the city and to the region, Fairchild urges, pointing out that when employers investigate areas in which to locate new businesses, they carefully examine the quality of the local workforce.  And one thing that attracts quality workers to an area is the attractiveness of its neighborhoods and the quality of its schools. Good neighborhoods and jobs are linked.

As a first step toward improving neighborhoods, Fairchild will bring the City Commission into partnership with the Dayton Public Schools to bring to fruition a plan to make the city’s elementary schools into neighborhood community centers.  Ten years ago Dayton invested in the building of some beautiful new schools, with the promise of making these schools function as community centers for the neighborhoods in which they are located.  Currently only five of the 21 schools have neighborhood center status. Fairchild recognizes that a strong alliance between the city and the school system is necessary to expand this vision to levels at which all neighborhoods will benefit.

Fairchild wants to see the elementary schools as places where the neighborhood comes together to enjoy services and recreation, to attend meetings and social events, and to get to know one another.  He would like to see the elementary schools offer recreational opportunities, after-school programs, summer camps, meals, activities for seniors, health clinics, tax preparation help, bike safety programs, local art exhibits and other programs the residents of the particular neighborhood would be empowered to choose.

Fairchild would work hard to see that Dayton’s elementary schools function as anchor institutions in hubs of improvement and redevelopment.  Concentrating on several blocks around each elementary school would be an effective starting point for efforts toward comprehensive neighborhood revitalization. Encouragement of quality infill development around the schools would be part of the revitalization efforts, along with planned green space consisting of community gardens, pocket parks, and other beautifying and sustainable uses.  Infill and green space would result from increased efforts to demolish abandoned buildings which cannot be salvaged, eliminating the “blight” which affects some of our neighborhoods.

Darryl Fairchild recently addressed Dayton City Commission, calling on that body to come up with a cohesive, comprehensive plan for residential neighborhood revitalization. Click here to read his remarks!