Abandoned, boarded up, deteriorating houses. Eyesores. Fire hazards. Dangers waiting to happen. It bothers just about everyone and has been a common concern brought up by citizens. Improving Dayton’s neighborhoods is Darryl Fairchild's No. 1 priority, and the elimination of blight is one obvious and important way to move forward. It's a matter of making this issue a priority when it comes to the City's budget, and it takes strong leadership that cares deeply about our neighborhoods to make that decision. 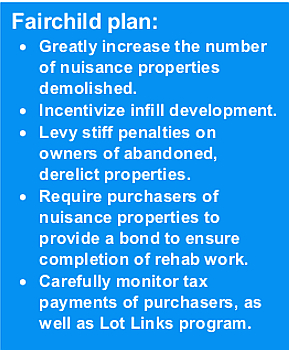 The problem of vacant and deteriorating housing and commercial buildings is not new to Dayton, as the city has seen significant population loss since 1960, resulting in a glut of housing stock which exceeds the demand for housing.  That’s just one of the major factors leading to the abandoned properties challenge in Dayton.  But the problem was exacerbated by the 2008 financial crisis.  Today the number of blighted properties in the city hovers around 6,600, UP from 6,000 two years ago.

It is interesting to note that not all of these abandoned houses in Dayton are the product of families foreclosed on and forced out of their homes. One third of the vacant properties are owned by businesses and individuals with two or more structures on the abandoned properties list, according to a 2013 Dayton Daily News investigation. Many of the owners are out-of-town speculators; many of the businesses are limited liability companies (LLCs), meaning that the business partners are not personally liable for housing code violations or payment of property taxes, the DDN story reports.

But the number of tear-downs by the City of Dayton per year barely makes a dent in the number of blighted properties. Blighted, vacant properties drive down property values in a neighborhood and create eyesores which psychologically cast a pall over the community. They often become sites for a range of illegal activities, with drugs and prostitution leading the list. They can attract rodents and other pests, and become fire hazards, whether due to trespassers burning candles or lighting fires, or to outright arson. As of June 2017 there had been 33 fires in abandoned properties in Dayton, and 29 of them were caused by arson. No one wants to live next door to a falling down, boarded up, graffiti-streaked wreck of a building, yet many Dayton residents do. Some streets in Dayton have dozens of abandoned properties on them.