The development we have seen in Dayton over the past several years has been “lopsided,” Darryl Fairchild stresses, pointing to the neglect of our residential neighborhoods while development in our downtown has grown.  The current City Commissioners have prioritized the Greater Dayton Plan, which focuses on more upscale development in the city core, designed to attract millennials and higher income residents.  Meanwhile our neighborhoods have deteriorated. 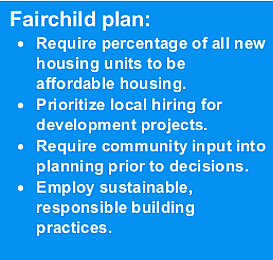 Fairchild pledges that as a City Commissioner, he will make neighborhood development and improvements his No. 1 priority, emphasizing reinvesting in residential neighborhoods. He will ensure that all Dayton citizens reap the benefits of development, not just some. He will fight for the adoption of  Equitable Development principles and Inclusionary Zoning, equity measures which historically ensure community-wide benefits, such as:

These are just some of the equity practices which can be required of private developers.  Fairchild is continuing to research other models that will bring benefits to all Daytonians.

“The most successful cities in the future will be ones where there are mixed incomes and where people are not segregated by their economic status,” maintains Fairchild.  “Those in the middle and on the lower end of the income scale will be able to live in neighborhoods where they are close to opportunities, like jobs, retail, food, and amenities such as the arts, parks and recreation.”

There must be a “both/and” approach to Dayton development, Fairchild says, one in which neighborhood investment is not overlooked, but, instead, given attention and public resources along with development downtown. City development planning needs to be strategic, comprehensive and designed to leverage more investment.

Prioritizing only higher-end development in the city’s core exacerbates divisions based on disparate economic resources and brings the danger of “putting in place a housing pattern we won’t be able to undo going forward.”  The danger of gentrification, which displaces current residents and results in the loss of social capital, is something that can be avoided with better, smarter and more comprehensive planning for development—development that is equitable and of benefit to all Dayton people.